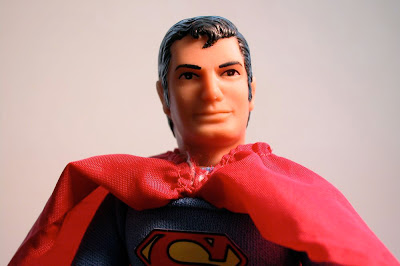 To me, this is the quintessential superhero action figure. Let me explain. Before this figure, my 6 year-old pop culture world revolved around things like Popeye, Sesame Street, and Disney characters. My toys mostly consisted of things like Sesame Street Puppets, Fisher Price Little People, Smokey the Bear bendies, Disney bubblegum banks, and even a real corn cob pipe and sailor hat so I could dress up as my favorite hero, Popeye. I even tried eating spinach right out of the can once to emulate my hero. Once. 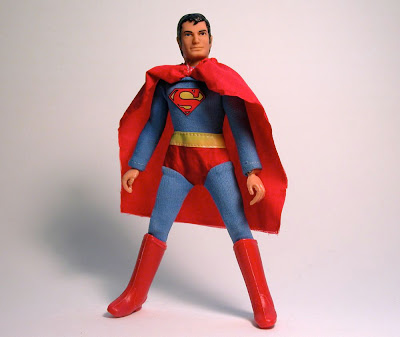 One evening, my Dad returned from a business trip and presented a return-from-travel gift to me that would set my life off on a new and exciting course (cue rising music and angel chorus). My Dad gave me a Mego Superman. Now, before I go much further, I should mention that superhero action figure toys were not a part of the fabric of American culture like they are nowadays. This was something revolutionary. It was 1973 and I hadn't ever seen a toy quite as wonderful as that first Mego Superman that my Dad gave me. He was poseable. He had fabric clothing and he looked just like Superman...or at least how I thought Superman should look. 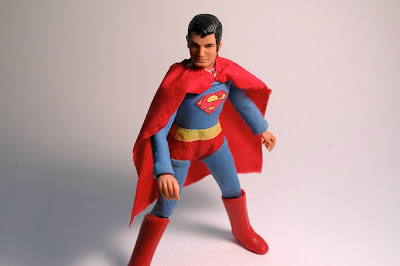 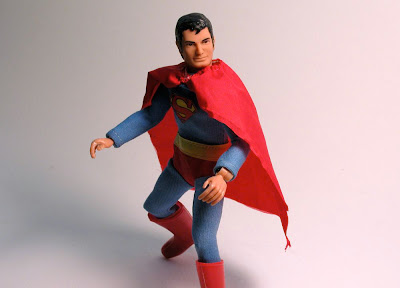 My love for superheroes began the moment I received a Mego Superman from my Dad. I distinctly remember a fascination that started at that moment and has, pretty much, continued on to this very day. I would even go so far as to say that my work in comics drawing and painting superheroes is due, indirectly, to my receiving that first Mego figure. My Dad handing that figure to me is "burned into my brain" like not many other moments from my childhood have been. So, now, every time I see a Mego Superman, I'm reminded of my own real-life Superman...my Dad.

The Mego Superman in the photos is, sadly, not my original Superman. My original figure is long-gone and saw so much play time that he became very tattered and worn...like a loved toy in the hands of a six-year old should. The figure pictured is a more recent acquisition but is a vintage figure from the same year as my original. 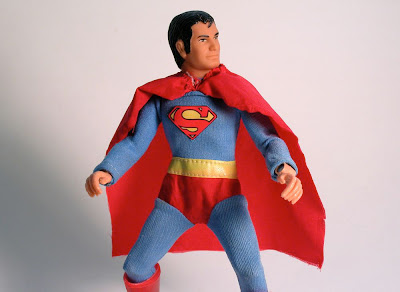 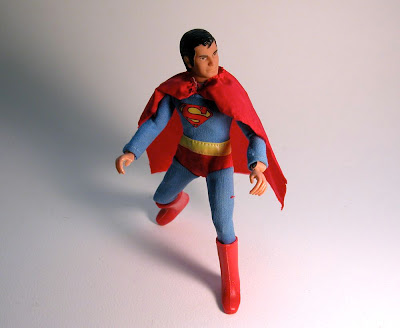 Superman was one of the first four figures that Mego produced (along with Batman, Robin, and Aquaman) as part of the World's Greatest Super Heroes line of figures.

A Mego Superman should include his blue jumpsuit with cape and emblem attached (early emblems were paper stickers, later issues were fabric stickers), and two red plastic boots. 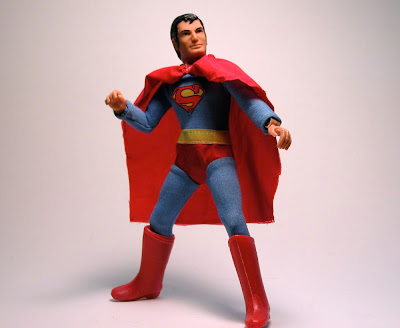 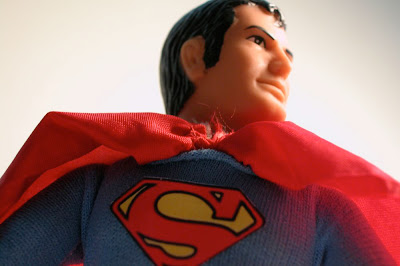 Posted by Brian Ashmore at 2:50 PM