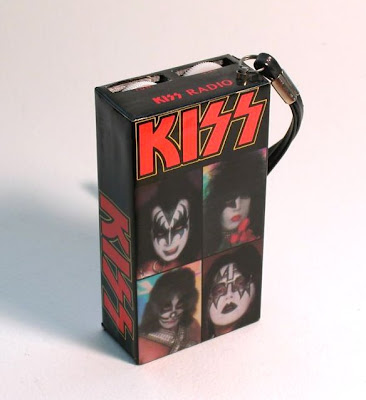 Love 'em or hate 'em, KISS was a force to be reckoned with in the 1970s. Their concert tours were like traveling circuses complete with pyrotechnics and over-the-top stage antics. With costumes and face makeup right out of a comic book, KISS (in the minds of many kids) rode the line between rock and roll musicians and living comic book characters.

KISS's stage show and persona were a perfect fit for the type of marketing that KISS began to employ in the mid-Seventies. At first, it started with the usual rock and roll merchandise items like posters, t-shirts, and belt buckles. Eventually, though, store shelves began to carry things like toys, games, puzzles, lunchboxes, school supplies, and sleeping bags. At present, KISS has left no stone unturned when it comes to KISS merchandise. Would you believe there's such a thing as a KISS branded house key? No joke. 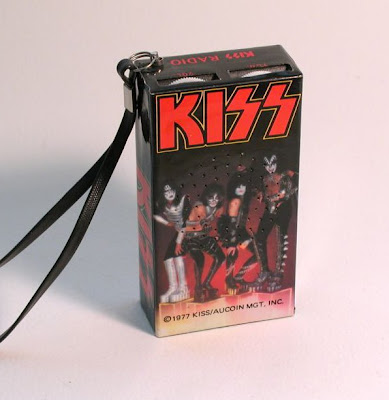 In the 70s, things were a bit simpler when it came to music "on the go." There were no ipods, walkmans, or cell phones packed with music. There were, however, hand-held portable transistor radios. Most often, these small radios could only receive AM stations and would play music through a single mono speaker. Never leaving a marketing opportunity untried, the KISS transistor radio was born in 1977.

The KISS radio was only sold through mail-order and was promoted through low-budget television commercials. Cheaply made, the images of KISS on the radio are actually stickers that wrap around the four sides and top of the unit. The radio also features a hand strap to help the listener keep the radio from hitting the ground while dancing and grooving to the sweet sounds of AM radio. 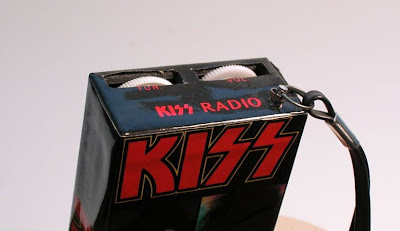 I wonder... how many times did kids have to listen to "Muskrat Love" and "Copacabana" while waiting to finally hear "Rock and Roll All Nite" on these little plastic nuggets of audio AM bliss?
Posted by Brian Ashmore at 9:06 AM