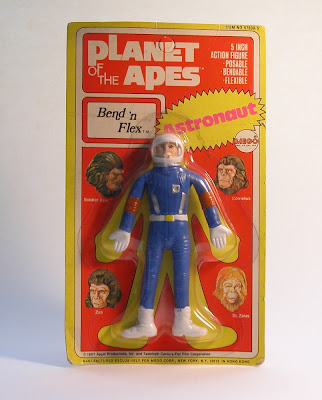 Quick post. This is Mego's Astronaut from their Bend 'n Flex bendy series from 1975.

I picked this guy up last year from a Mego Marketplace seller. I'm keeping him carded as I love the cheesy, vintage artwork and, in this case, the packaging feels as much a part of the toy as the toy, itself. I especially love the illustration on the back of the package that shows all the characters in the series. 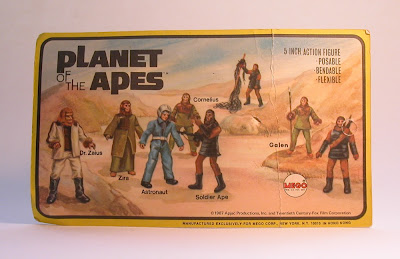 I only had two of these Planet of the Apes bendies as a kid...the astronaut and a soldier ape. I got the Astronaut first and he accompanied me on a road trip from Minnesota to Montana to find a new house when I was about 8 years old. While visiting Montana, we stopped by a Kmart and I was allowed to buy a soldier ape. So, my strongest memory of these Ape bendies has to do with playing with them in the car for hours and hours while riding from state to state.

Better than a Gameboy or Ipod for passing time? Eh, probably not... but there wasn't a whole lot for a kid to do on long road trips back then.

I've said it before, but I love how Mego got away with making their astronaut toys look NOTHING like the astronaut characters from the films.