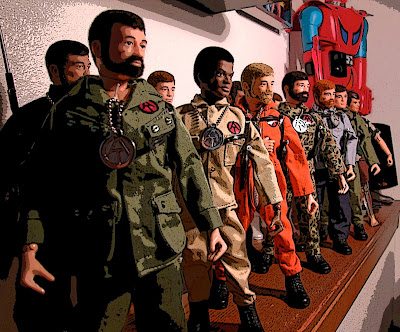 As I work my way back through my favorite toys of childhood, I find myself once again fascinated by GI Joe and the impact he's had on the toy world and culture, in general. I have a new appreciation for the open-ended "non-licensed" property of GI Joe. The 12" GI Joe vintage line is the kind of line that seems to have disappeared, for the most part, from modern toy store shelves. It's wasn't based on a licensed movie, TV show, or comic yet it prospered on the idea of giving kids enough to trigger their imaginations... to carry out their own adventures with the toys.

The first GI Joes were 12" military figures (these were the very first true action figures). There were four basic figures available (Action Marine , Action Soldier, Action Pilot, and Action Sailor) and they all utilized the same headsculpt with different colored eyes and hair. Uniforms, weapons, and vehicles could be purchased to supplement the basic Joes. Hasbro used the basic razor and razor blades marketing strategy... and it worked. A child might buy or receive a figure but would then spend more money on items to be used with the figure. While I have a somewhat detached love for the first, military Joes (they were before my time), the GI Joe Adventure Team was MY GI Joe, growing up. The Adventure Team was introduced in 1970... right about the time I started really playing with toys as a child. I only had a couple of the AT Joes as a kid before moving on to such things as Mego Superheroes, Evel Knievel, and the Six Million Dollar Man (these licensed properties had a huge draw on me at such a young age) but I loved the Joes I did have. I never had any of the accessory sets or vehicles but enjoyed playing with the figures, all the same. In fact, my first "GIJoe" wasn't even a GIJoe, at all. You see my Dad wanted to buy me a GI Joe for my birthday but couldn't find one to purchase. So, on my birthday, I opened a Ken doll dressed in a GI Joe Marine Dress uniform (there you go, Bubba, have a field day).

The GI Joe Adventure Team was basically an upgrade of the military GI Joe figures. Hasbro took each of the four military figures, added flocked hair and beards, added a shoulder holster and pistol, and a giant AT medallion around their necks. Their uniforms were even identical to the ones used for the military figures. As America became embroiled in Vietnam, the idea of playing with toys based on war became less and less popular with the American public. So, Hasbro, in a brilliant move, transformed their military Joe line into an adventure line full of heroes that would rescue animals and search for lost treasure. They became more like Indiana Jones and less like Audie Murphy (you youngins will have to look that one up)... although, Indiana Jones wouldn't actually appear on the pop culture scene for another 11 years or so.

Many great vehicles, playsets, and accessories accompanied the release of the Adventure Team and the line continued to grow and prosper until 1976 when competing licensed toys (like The Six Million Dollar Man) and high oil-prices made the line no longer profitable.

In the past few months, I've started to acquire more of the original, vintage AT GI Joes and am excited to finally bring more AT reviews to Yesterville. So, stay tuned, as I post on some of the individual vintage AT Joes and even some of the more recent AT replica figures. It's a fun line that harkens back to a simpler time for many of us when playing with our GI Joes in the backyard with a buddy or two was about as much fun as you could have with a toy line.
Posted by Brian Ashmore at 5:15 PM