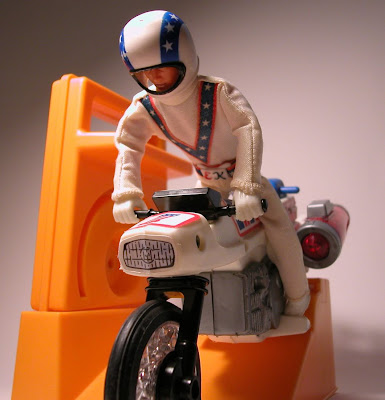 The Evel Knievel Stunt Cycle was a tremendous success for the Ideal Toy Company in the early 1970s. Eager to continue the line and keep it a success, Ideal produced many different vehicle sets that used the same "rev and go" technology that made the Stunt Cycle such a success with kids and retailers alike.

One of those toys is the Evel Knievel Super Jet Cycle. This set was first produced in 1976, just a few years after the introduction and success of the original Stunt Cycle set. 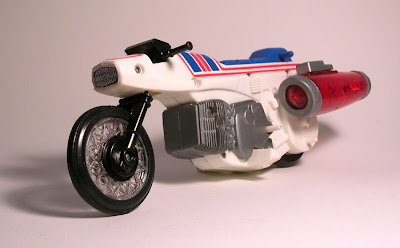 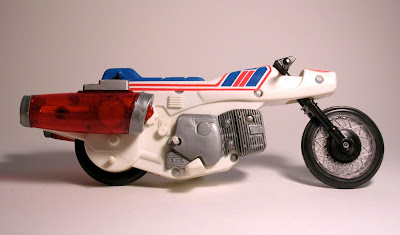 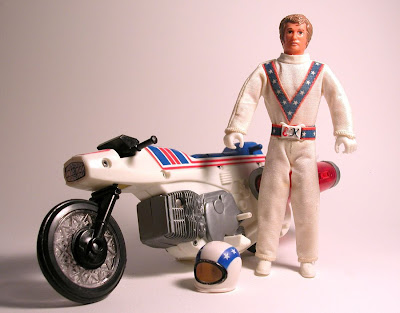 Originally, when talking about jumping the Grand Canyon (ultimately to become the Snake River Canyon), Evel Knievel promoted the idea by showing off a jet-powered motorcycle that had wings mounted to the bike. Eventually, this design gave way to the, now famous, "Skycycle" rocket that Evel used to attempt his jump across the canyon back in September 1974.

I have a hunch that the design of this toy is loosely based on Evel's original idea for his jet-powered motorcycle. 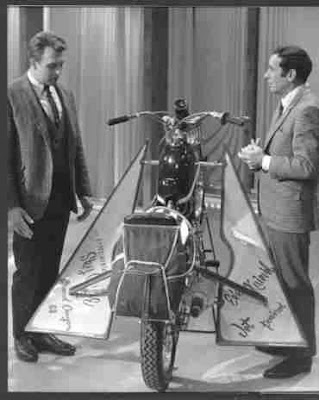 Evel (left) on a talk show with his Jet Cycle prototype. 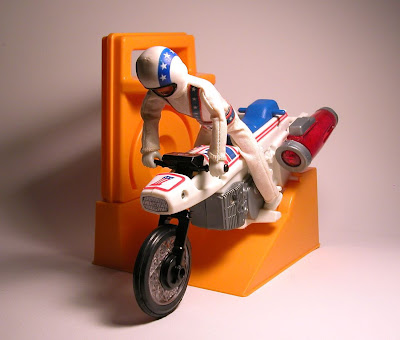 The red "jet pods" on the back of this toy actually have a function. When you rev the cycle on the Energizer, a wheel in each of the jet pods spins against a piece of flint and produces sparks (you had to replace the flint from time to time). The red pods fill with sparks and the sparks also shoot out of the holes on the sides of the pods. This was a very cool effect. However, it was dampened by the fact that the spinning wheels in the pods had a dragging effect on the cycle's flywheel motor that kept the Jet cycle from reaching the kinds of speeds that the original Stunt Cycle could attain. All things considered, though, the Jet Cycle was still a great toy. 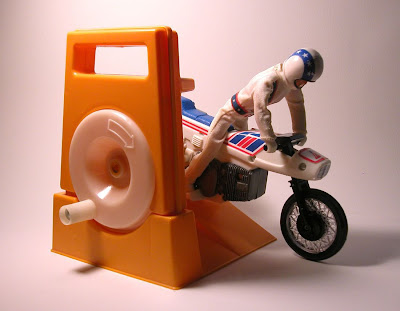 I received my original Super Jet Cycle for Christmas in 1976. I'll never forget jumping this toy over ramps in the basement over and over again. In Montana, there was always quite a bit of snow outside during Christmas.

The Jet Cycle did have some improvements over the original stunt cycle. It was made out of a softer, studier plastic that was less prone to breaks and cracks. The original Stunt Cycle, although sturdy, was made of a harder more brittle plastic. This, most often, resulted in broken handlebars and foot stirrups. It was much more difficult to break any pieces on the Jet Cycle. 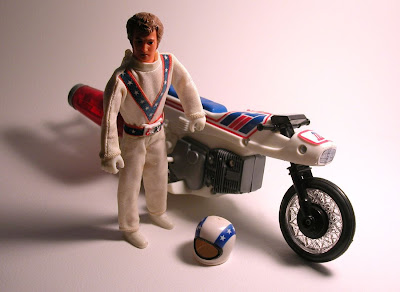 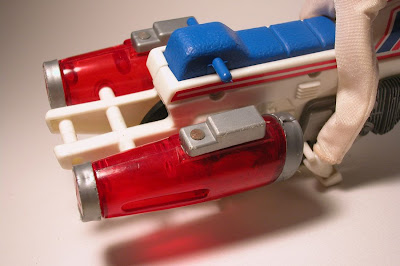 Like the original Stunt Cycle set, the Super Jet Cycle came with the Energizer base, instructions, decals to apply, and a white-suited Evel Knievel figure with helmet (at this point, Ideal had stopped including Evel's famous "Swagger Stick" cane with figures). A pair of extra flints were also scotch-taped to the front of the instruction sheet. It came in a windowless box with a terrific illustration on the front and line-drawing illustrations of other available Evel Knievel toys on the back. I love these kinds of illustrations from this era. No photoshop effects, computer coloring, or filters...just fantastic hand-produced artwork. 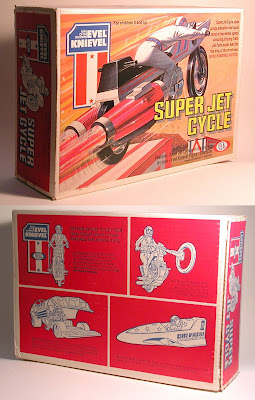 I'll bet Ideal Toys had a lot of fun figuring out what other vehicles besides a basic motorcycle Evel Knievel figures could ride across the driveway, basement floor, or roof. They came up with quite a few inventive toys before the line shut down around 1977. The Super Jet Cycle was no exception and is another classic Evel Knievel toy that should never be forgotten. 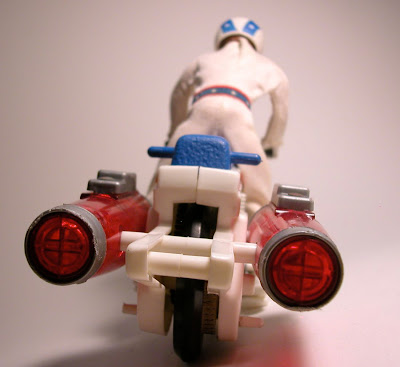 Posted by Brian Ashmore at 7:30 AM