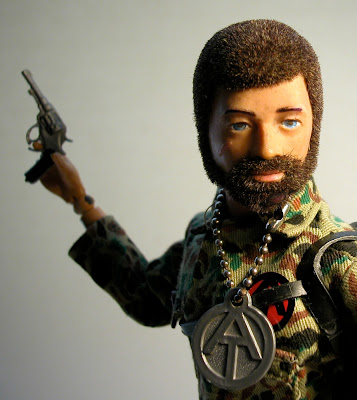 This is Hasbro's 1970 Land Adventurer from the GiJoe Adventure Team line of action figures. As I've mentioned before, with public backlash against military toys in the late 60's and early 70's, Gi Joe needed to redefine himself as an "adventurer" rather than a soldier. With newly-flocked hair and beard (vs. the beardless painted hair previous versions of Joe), the Adventure Team was ready to take on Mother Nature instead of foreign soldiers. This change from soldier to adventurer proved to be quite a success and millions of these figures found their way into countless backyard adventures everywhere. 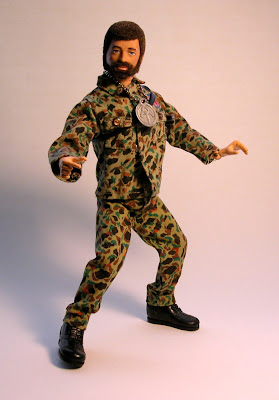 When I was about 5 or 6 years old in the very early 70's, it seemed that every kid had an Adventure Team GiJoe or two (and maybe even a few of the 60's military figures handed down from an older brother). Like the 60's GiJoe line before, when you got your hands on an Adventure Team (AT) Gi Joe, you weren't just introduced to a world of of action figures. No, you were inducted into a huge world of possibilities that included vehicles, playsets, and other uniforms and outfits. The amount of add-ons for Joe seemed endless and it was always a thrill to visit the toy store and drool over all the adventures your Joe (or Joes) could have if only Mom and Dad would pony up the dough for new Gi Joe stuff. Your Joe could capture a wild gorilla or white tiger, dig up an old mummy, or even recover a stolen idol (Yep, ol' Joe was doing it way before Indy). Most the time, the smaller accessory sets could be purchased with some saved allowance but the bigger sets usually ended up as Christmas or birthday presents. 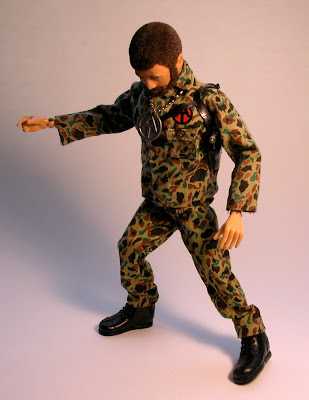 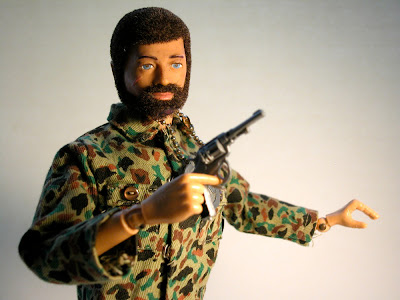 Although, there were five or six different figures in the Adventure Team line-up. The Land Adventurer seemed to be the "go to" guy for most missions. His visage (dark hair and beard) graced most of the add-on adventure sets' packaging. He also seemed to be the most prevalent Joe amongst neighborhood kids, for whatever reason. Mabye it was his camo outfit that attracted so many kids.

The figure in the photos is a fairly recent addition to the Yesterville archives. He's the first version of the AT Land Adventurer with the "nose picker" (affectionately named for the extended index finger on the right hand) hard hands, pistol, and shoulder holster. Later versions of the Land Adventurer would feature "Kung Fu" grip hands and a scoped rifle. Although this original style of hands made it somewhat difficult to hold guns and accessories, they have held up much better over time than their Kung-Fu counterparts. The Kung Fu hands are made of a rubber material that has dried and broken (take note Hot Toys!) on many figures, while the original hands are made of a less flexible, sturdier plastic that has survived on most figures, just fine. 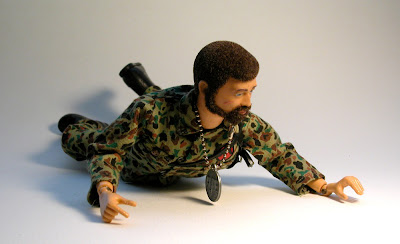 One of the coolest things to me, as a kid, about the AT GiJoes was their big, chained "AT" medallions around their necks. I loved the AT graphic symbol, for whatever reason, and almost viewed it to be like a superhero logo. This was a replacement accessory for the metal dog tags that came with the earlier 60's GiJoes. During a meeting at Hasbro during the development of the AT logo, one of the employees remarked at how much the AT symbol looked like a peace symbol (which was EVERYWHERE back then... t-shirts, posters, bumper stickers, etc.). The owner of Hasbro responded by saying, "Let's hope so!!" Hasbro was eager to leave the stigma of military toys behind and any similarity to the peace symbol certainly couldnt have hurt. At any rate, there's just something I really love about these huge, over-sized medallions that is just so indicative of the early 70's. 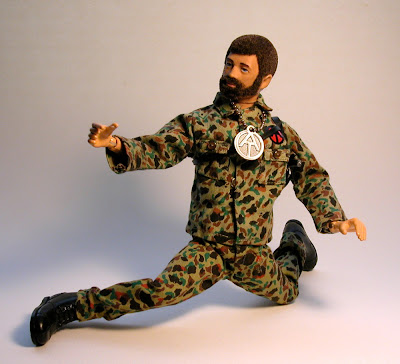 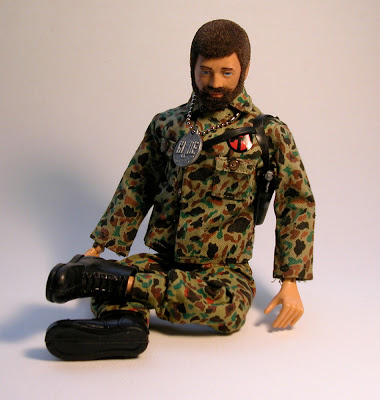 One of the things that many younger action figure collectors are surprised by when they first hold and pose a vintage 12" GiJoe is just how well-articulated and posable they really are. I'm always a little shocked by this since GiJoe was the very first boys' articulated action figure and the development guys at Hasbro really did their homework and came up with an amazing base body for their new toy. In my circle of (older) friends, it's been pretty much common-knowledge that action figures started on a high point and had begun to de-evolve (articulation-wise), in the late Seventies with the onset of small 5-point articulated figures. Many younger collectors grew up in the 80's and 90's when action figures were smaller, simpler, and much, much less articulated than their predecessors like GiJoes and Megos. As more and more companies have started putting more and more articulation into their smaller all-plastic figures, many believe this to be a new development in the world of action figures. That's my guess as to why the "disconnect" happens, anyway. 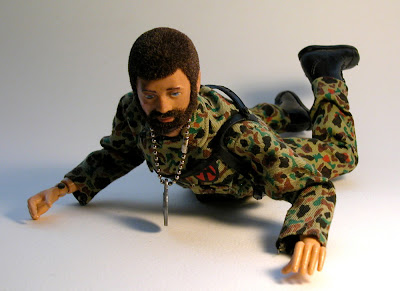 The Adventure Team Land Adventurer was many kids' very first action figure. He predates even the first Mego Superhero figures by several years and the smaller 3 3/4 Joes by over a decade. He truly is a prime example of a much simpler time in the world of action figures. I can hardly believe he's over 40 years old this year. Someone put a brake on these years... they are rolling by much too fast. 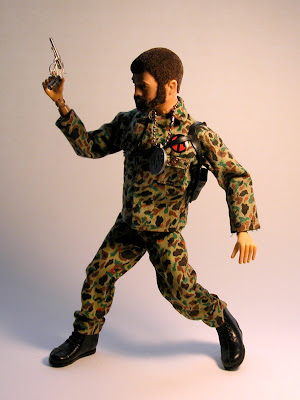 Posted by Brian Ashmore at 1:35 PM