What My Dad Kept 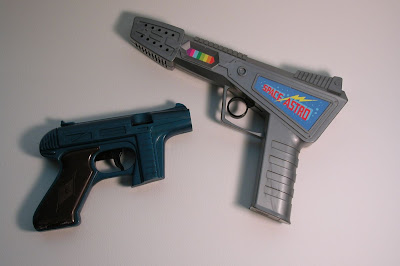 My Mom and Dad have always been good at saving my brother and I's childhood things. Anything that survived after we were through with it got tucked away in storage to be found as treasure at a later date. I know I'm extremely lucky as I often hear story after story about how someone's toys were either thrown away or sold in a garage sale by parents. Luckily, over the years, I've been able to find the majority of the things I played with as a kid.

This past week, I spent several days helping my folks sort through things in their garage to either be organized or given to a place like Goodwill (furniture, clothing, etc.). To my surprise there were still quite a few childhood things that belonged to my brother and I that I hadn't somehow come across in earlier "toy recovery missions." So, this is kind of a "down and dirty" post to show some of the things I came across this past week in boxes that were in my parent's garage. These are all items from the mid to late 70s with just a couple of exceptions.

Toy Guns - The above shot is a couple of toy guns from the 70s. The Space Astro gun is one of those light and sound jobs that drive parents crazy. The other is a gun that would shoot little plastic colored disks. I believe that this one may have come on a card and been Star Trek branded, despite it's generic appearance. We also had a Star Trek phaser that shot the same disks. I'm not sure what happened to that one. 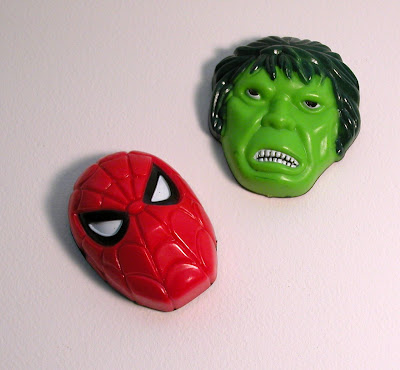 Spiderman and Hulk Silly Putty Containers - Spiderman had red putty and Hulk had green. The putty is still inside. 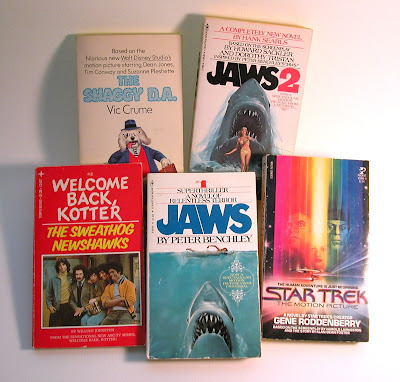 Paperback books from the 70s - I had no idea that I had a Welcome Back Kotter book, at some point. I'm sure I got it through one of those Scholastic school book orders. For those of you a bit younger, Welcome Back Kotter was a popular TV sitcom (remember those?) that ushered a very young John Travolta to stardom (he's on the cover at the far left). 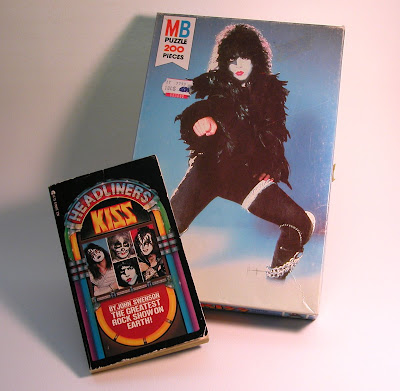 Kiss puzzle and book - The Kiss book is another school order book. I don't remember having the puzzle...but there it is. 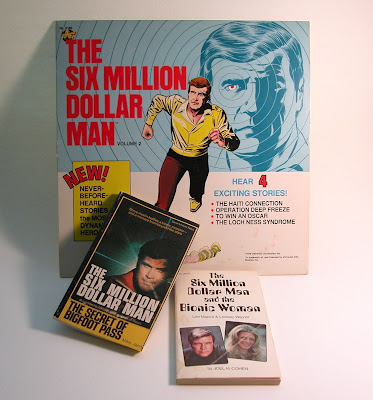 Six Million Dollar Man record and books - I had always wondered what happened to these over the years. I used to love to listen to the adventures on this record. It's great to have the books back again, as well. 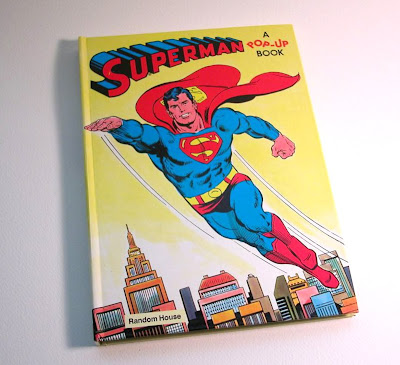 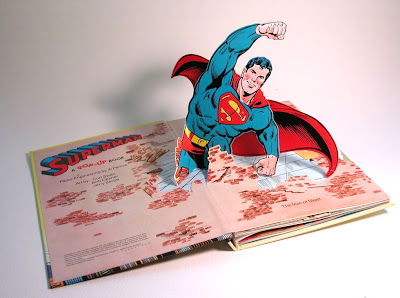 Superman pop-up book - This is a pop-up book from 1979. It has some pretty cool actions that the pages do when you slide a lever or turn a door. 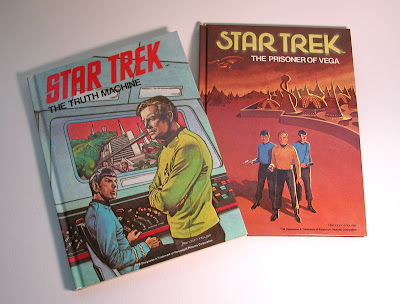 Star Trek children's books - I love the illustrations in these and they are illustrated throughout. Good stuff. 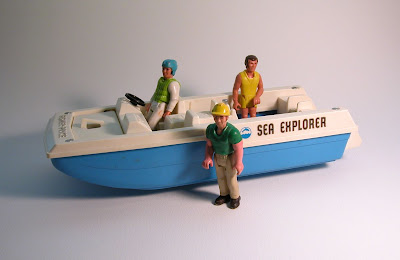 Fisher Price Adventure people - I don't know a whole lot about these guys. They belonged to my brother. I'm sure there are quite a few pieces missing. 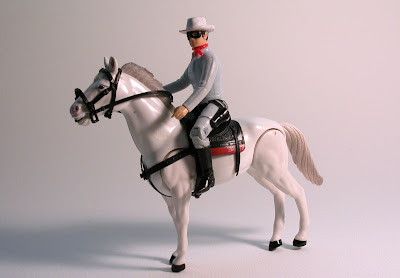 The Lone Ranger and Silver - The Lone Ranger still had a bit of residual clout in the 70s and early 80s from previous decades. This is a 3 3/4 scale set from the 1981 movie, The Legend of Lone Ranger. So, not quite a 70s toy but close. 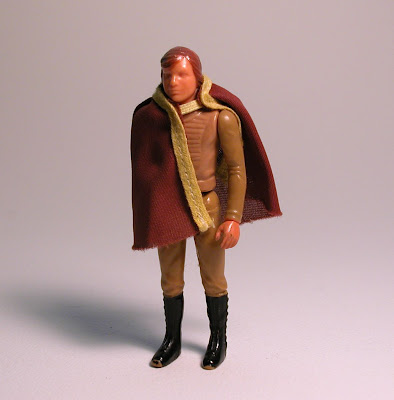 Starbuck from Battlestar Galactica - This is a 3 3/4 inch figure from Mattel. They created these in the wake of the tremendous popularity of Kenner's Star Wars figures. I always hated the fact that they didn't bother to paint the eyes on any of the characters. 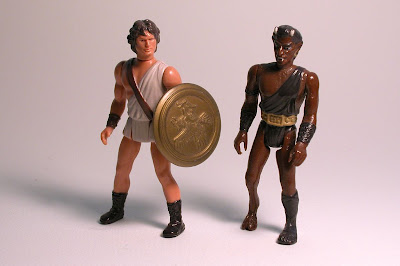 Clash of the Titans - These are a couple of 3 3/4 scale figures from the movie. Nice likeness of Harry Hamlin as Perseus...especially at this scale. 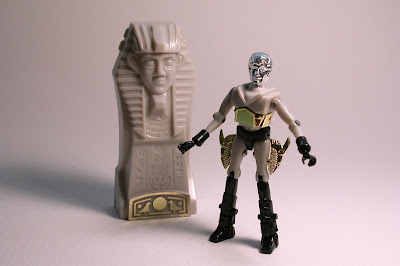 Micronaut - This was a very cool 3 3/4 scale (noticing a trend?) line of figures from Mego. I believe the concept was licensed from Takara's Microman line from Japan. Love these guys!! Although, I have no idea who this character is. He comes with an Egyptian style tomb to store him in. 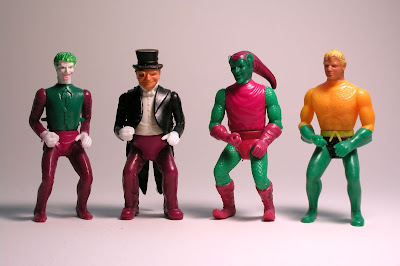 Mego Pocket Heroes - Mego made a complete line of 3 3/4 size heroes and villains. This is what's left of my brother's collection. 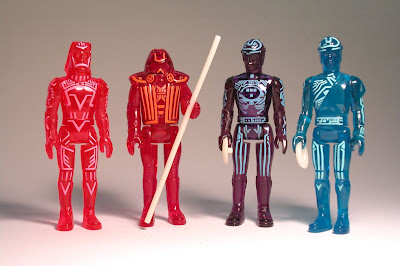 Tron - These are figures from the 1982 Tron movie (close but not quite 70s, again). They are also in 3 3/4 scale. They are made of a semi-translucent plastic. Cool. 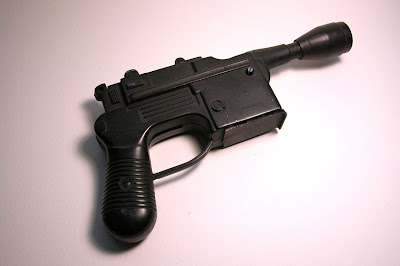 Star Wars Han Solo pistol - This, to me, is the coolest thing I found. My Dad made this for me out of a couple of other toy guns in 1977 before Star Wars toys started hitting toy shelves. He chopped pieces off, used part of a scope from another gun, glued things together, and painted everything black. Sure, it's not 100% accurate but it was close enough for me. I still think he did a great job, all things considered. This was at the bottom of a box that was headed to Goodwill. I almost didn't even look through the box...and I've been looking for this thing for years. Close call.

I hope you've enjoyed this smattering of stuff I found in my folk's garage... a little something for everyone, I hope. There are still a couple of other things I found that I will probably do a more in-depth look at in the future. 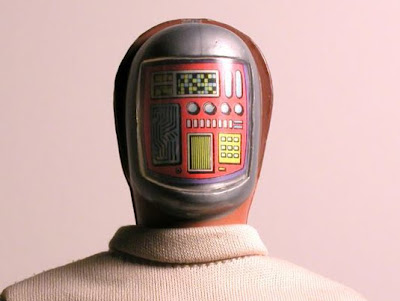 What's more dangerous than a super-powered robot that can disguise itself as your neighbor or your boss? Not much.

This is Kenner's Maskatron from 1976. Maskatron was introduced as Steve Austin's first enemy in the Six Million Dollar Man toy line. I remember getting this guy for Christmas, one year. My younger brother got one, too, even though he didn't have any of the other SMDM figures. He had a blast with this toy, anyway. 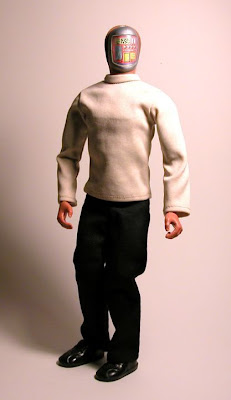 Maskatron is based on a very similar character from the Bionic Man TV show that was played by actor John Saxon. I don't remember the character being called Maskatron in the show but it's a perfect moniker for this chameleon-like "robot of doom." If you think about it, Maskatron is a very similar concept to the disguised robots from the Terminator films. Yet, he predates them by a good 9 or 10 years.  In fact, we need a Maskatron vs. Terminator comic book.  Someone, get on that. 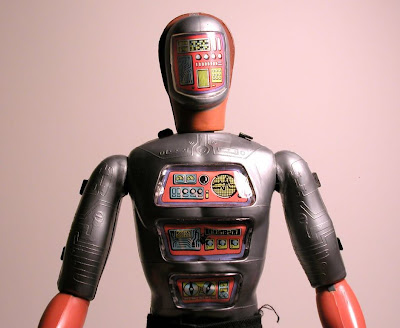 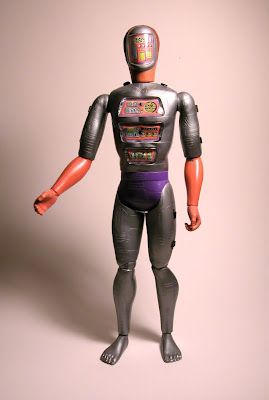 Maskatron was a very "feature rich" toy. He came with the 3 masks that would allow him to disguise himself as Steve Austin, Oscar Goldman, or his own separate identity. It was liking having 3 characters in one! Sort of like a robotic Captain Action, of sorts. 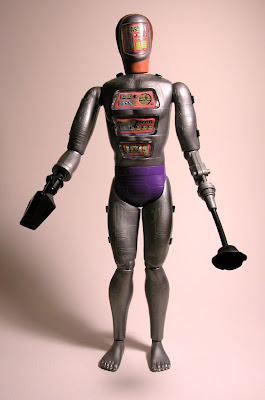 He also was able to shoot off his appendages at the elbows, knees, and neck due to spring-loaded limbs. Each limb has a button for shooting off an appendage or his head and also a sliding "lock" to keep limbs from flying off at unexpected moments. 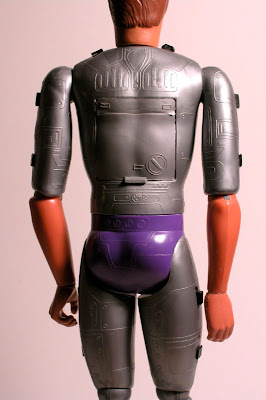 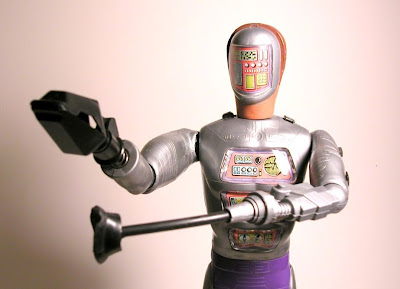 A black lobster claw-like arm and a suction cup arm were also included and could replace Maskatron's normal limbs whenever you liked. The claw opens when the claw's wrist section is pulled back and snaps shut when the wrist is released. It should also be noted that the three large "computer chips" in his chest were also removable. To top things off, Maskatron also has a door on his back for storage of unused masks in his torso.

This toy had tremendous play value and even seemed cool to kids who weren't all that "into" the Six Million Dollar Man TV show. On a side note, it's a bit tough to find a complete Maskatron, today, due to the enormous amount of accessories that were included with the figure. More accessories means more opportunities for things to get lost or broken. 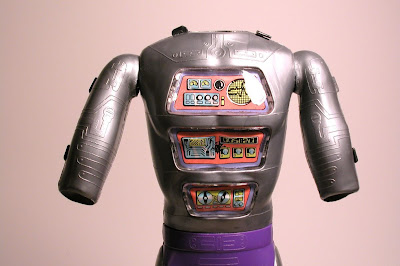 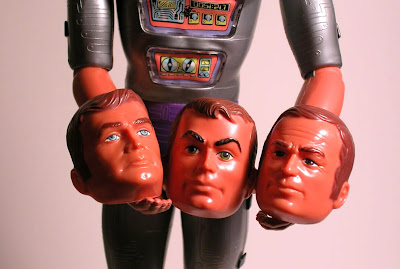 A complete Maskatron should include a beige shirt, black pants, two black shoes, 3 computer chips in the chest, 2 normal arms, 2 normal legs, a suction cup arm (although the rubber used is prone to deterioration after all this time), a claw arm, and 3 different masks. 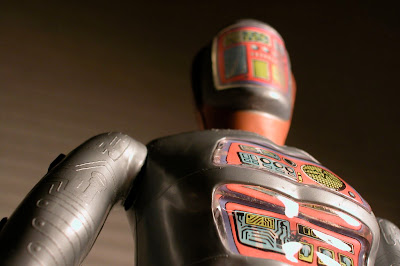